Faithful to its pioneer position in the market for the early 20th century Asian painters, Aguttes will hold its thirtieth dedicated auction on Thursday 30 September 2021 in Neuilly-sur-Seine. For this special occasion, and in order to meet the market demand, various Works of Art from Vietnam will be presented in a second part.

The Hanoi School of Fine Arts in the spotlight


Now a key event for art lovers and collectors, this thirtieth Aguttes sale will unfold in the first part some forty paintings and sculptures by renowned artists such as Vu Cao Dam, Mai Trung Thu, Le Pho, Evariste Jonchère or Alix Aymé... The interest in these artists on the international market has been revealed during the previous sales organised by Charlotte Aguttes-Reynier in the last 10 years.

Kept since the early 1970s in the same family, La cérémonie du thé is an important testimony to the work of the artist Mai Trung Thu. The artwork has been unveiled to the public by Aguttes in the past few months and will be presented for sale on 30 September. Mai Trung Thu is a Vietnamese painter who chose to settle permanently in France in the late 1930s. Although his work remained confidential for a long time, it has been brought back to light for nearly 10 years by the 29 sales organised by Aguttes, as shown by the results recorded. In 1971, the artist painted La cérémonie du thé, a work that gathers themes dear to him. As a ritual governed by Confucian principles, the traditional tea ceremony is a moment of ancestral tradition of sharing and serenity. Representing the pyramidal hierarchy of family members, the artist infuses a joyous composition with a colorful palette, making this scene an ode to the beauty of moments shared in family.
As the sale date of 30 September did not allow the presentation of this important work in the eponymous exhibition organised by the Musée des Ursulines in Mâcon, Aguttes decided to dedicate an exhibition of more than 6 months to it, thus allowing numerous amateurs and collectors to come and appreciate it in their premises.

This masterful work is surrounded by a beautiful overview of the teachings of the EBAI (Ecole des Beaux-Arts d'Indochine) by Vu Cao Dam, Mai Thu, Le Pho... 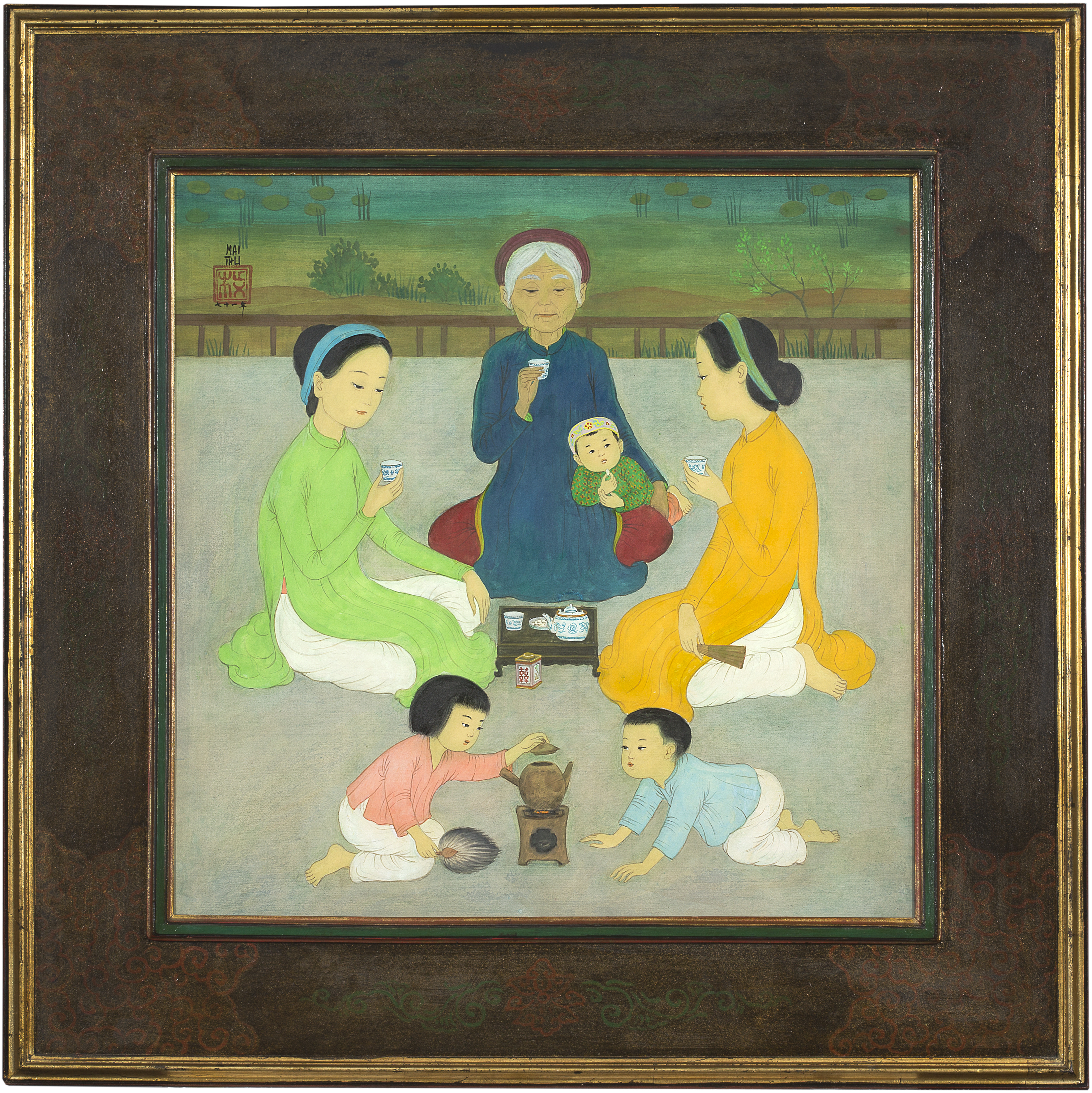 
Thus, the painter Vu Cao Dam - a contemporary of Mai Thu - also followed the precepts of Victor Tardieu in Hanoi before choosing to settle in France before the Second World War.
In a magnificent early work entitled Le Culte des ancêtres (The Cult of the Ancestors), he offers us a rare representation full of respect. A ritual based on respect and honour of ancestors, this cult is at the crossroads of various influences that have enriched Vietnam. From the incense holder to the posture of meditation, the artist recreates this particular atmosphere. The strength of the work also lies in its modernity and the simplicity of the setting, the lines directing our gaze towards the incense holder and to the rise of the smoke. By choosing a very large scale for a delicate technique such as working on silk, the artist accompanies the gesture of the young women with a profound respect. 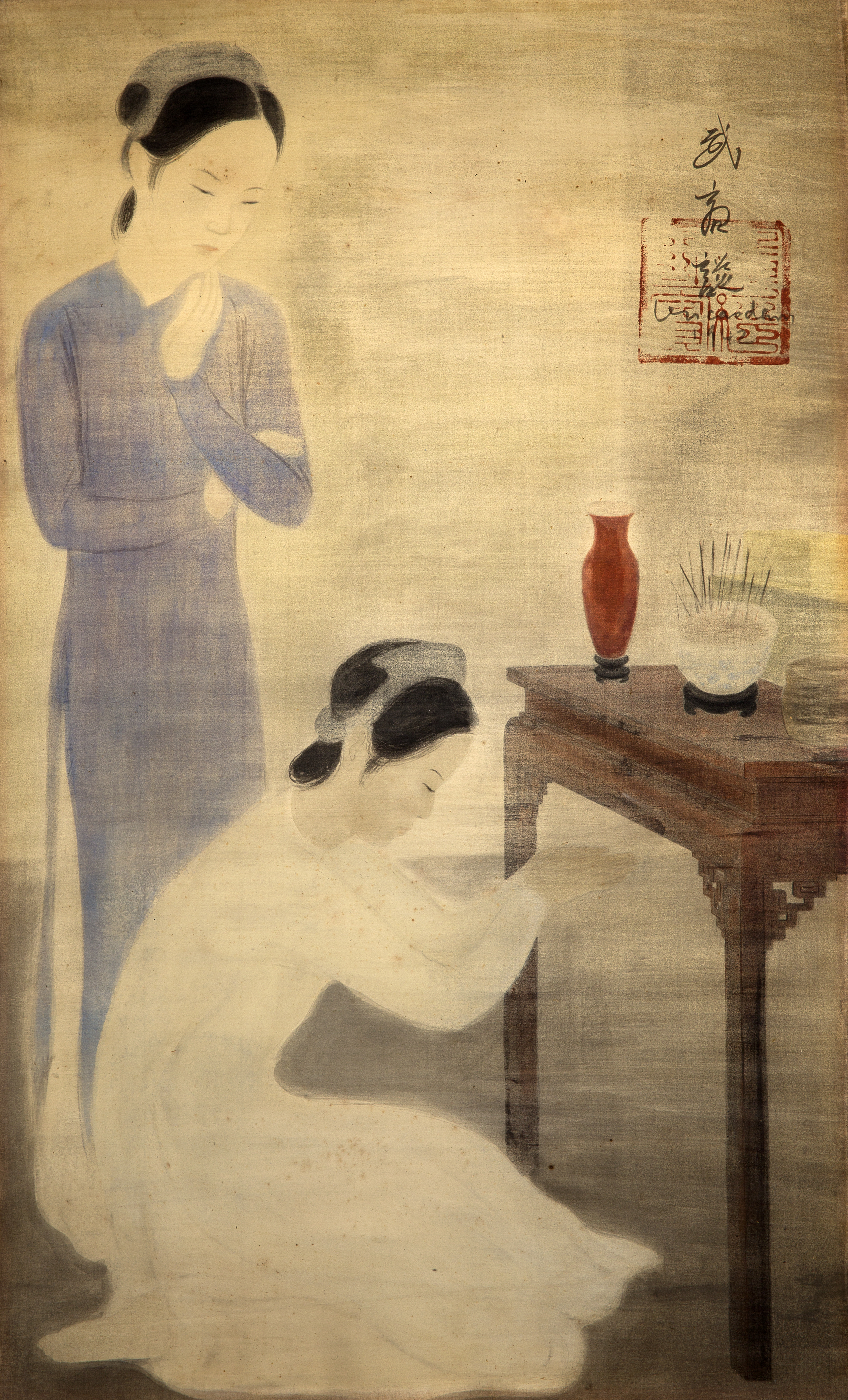 
A leading artist of the Indochina School of Fine Arts, Le Pho's work is a perfect syncretism between the Asian influences of his homeland and the European influences of his country of adoption, making him an exemplary ambassador of Indochinese culture. Largely inspired by the representation of women, the artist proposes in "La Couture" the vision of a woman focused on her needlework. The model's fine features and graceful gestures contribute to the homage paid to traditional scenes of daily life. 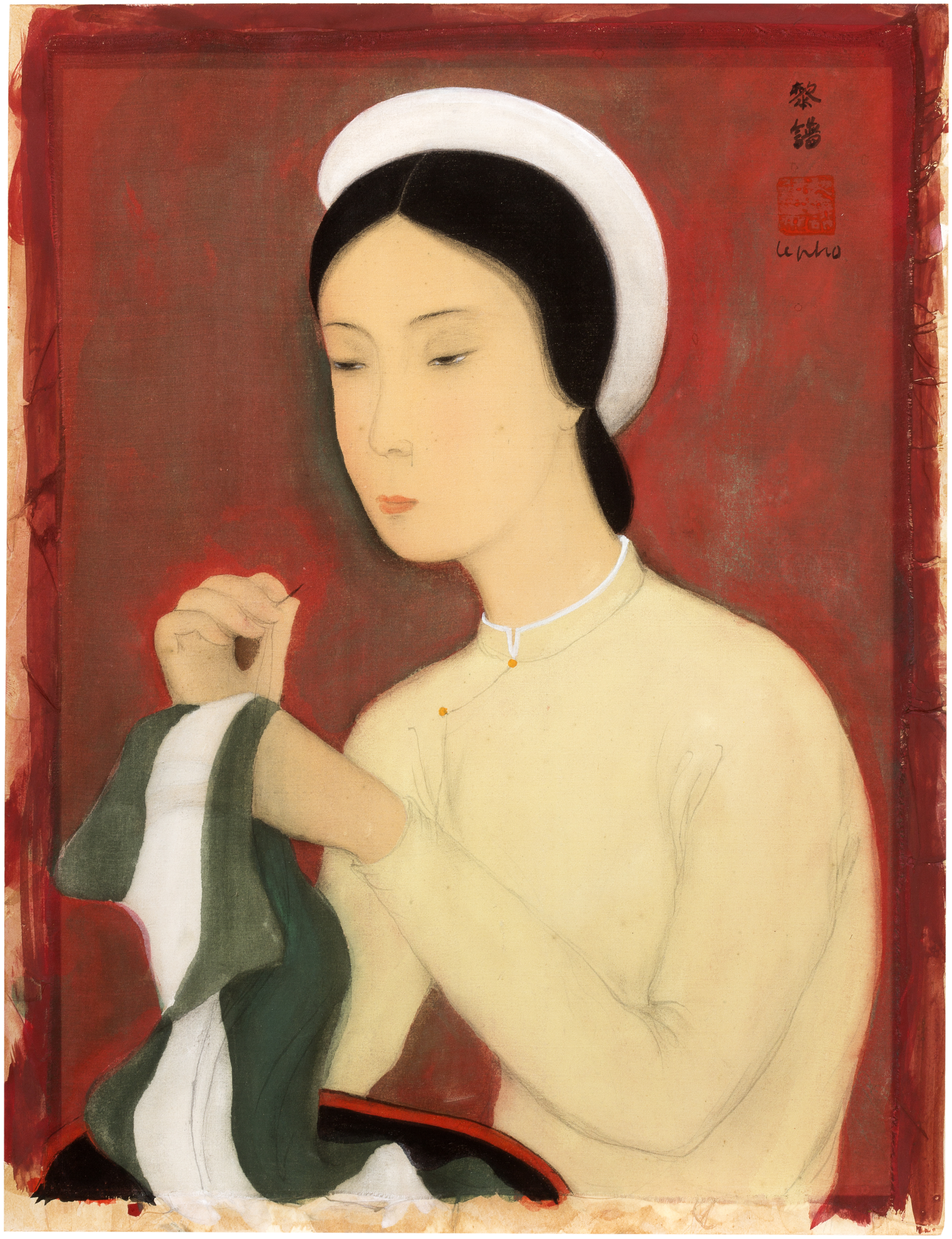 
Mai Trung Thu, the most politicized of the students of the first graduating class of the École des Beaux-Arts d'Indochine, stands out from his classmates by his choice of subjects. Composition à l'hortensia bears witness to his political convictions. Classically composed of a flower in a pot, placed on a piece of carved wood furniture, the subject is enhanced by the presence of the book Doi Song Moi placed on the bottom shelf. Written by Ho Chi Minh, founder of the Democratic Republic of Vietnam, this book, which could be translated as "New Life", sheds light on the principles to be adopted by Vietnamese citizens. 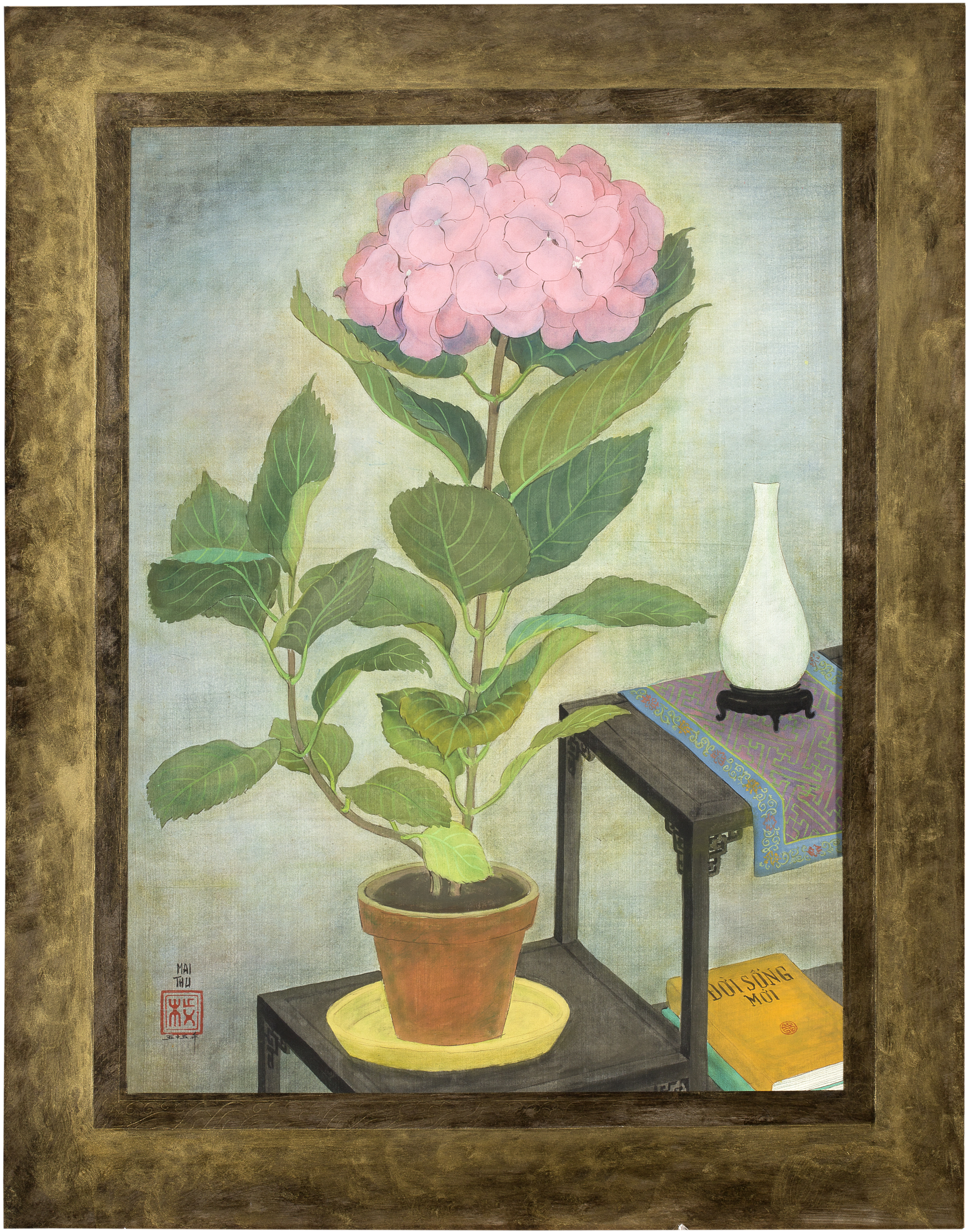 
A sculptor trained at the Ecole des Beaux-Arts in Paris, Evariste Jonchère won the prix d’Indochine in 1932. This allowed him to travel throughout Vietnam and then teach for a year at the Ecole des Beaux-Arts d’Indochine. When the first director Victor Tardieu died in 1937, he was chosen to succeed him. Under his direction, the school experienced a particular recognition for the Applied Arts and a strengthening of the practice of sculpture. Congaïe couture is a marvelous example of Jonchère's talent to communicate the beauty and tranquility of Vietnamese women. Time is suspended around this young woman dressed in the traditional Ao Daï. 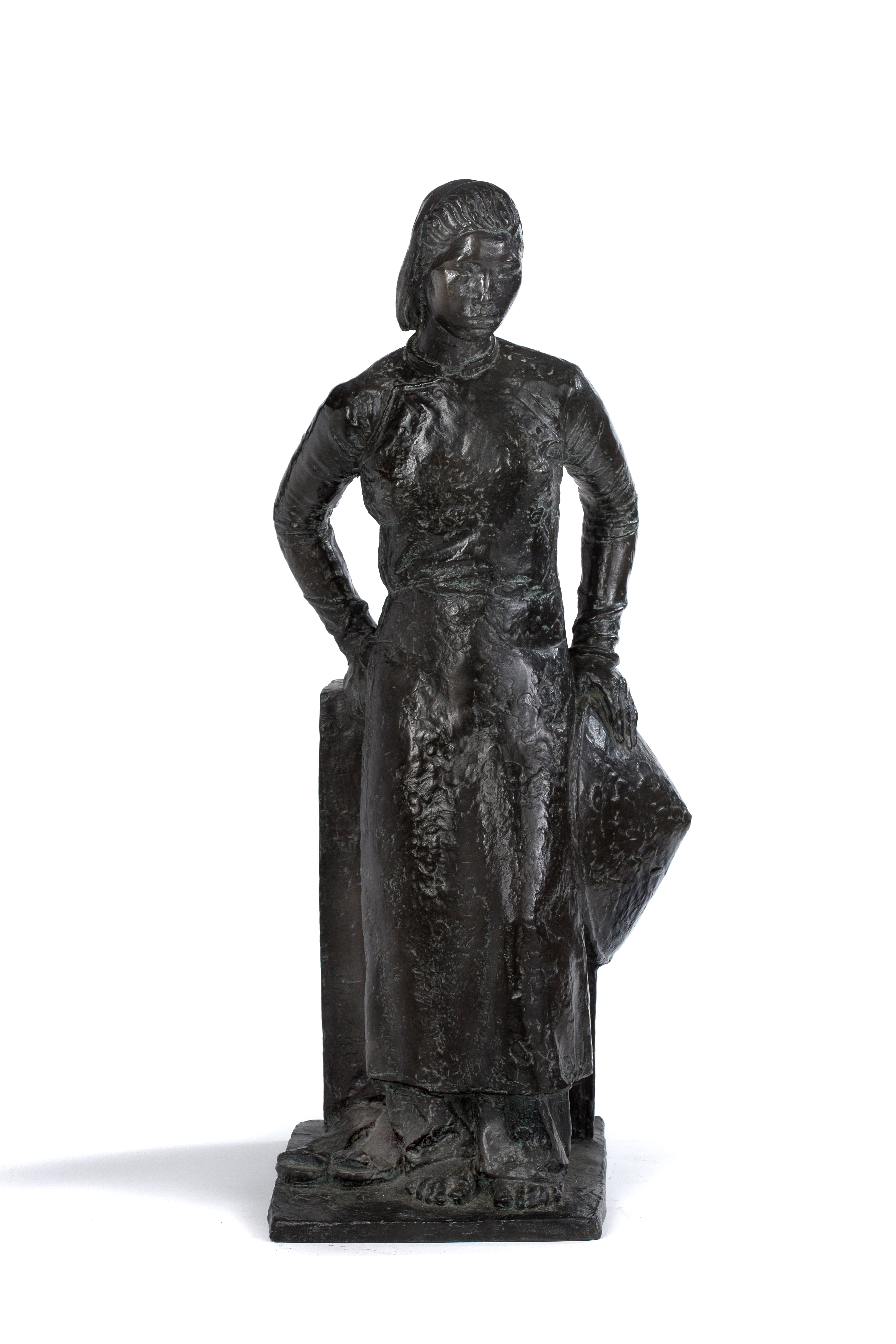 
A tireless traveler, Alix Aymé has traveled throughout Asia, taming a culture different from her own that she has endeavored to transcribe. Trained by Maurice Denis, a Nabi painter, she retains from her master the importance of colors. In "Les toits de Yunnanfou", thanks to a low angle view, she layers on the canvas an enchanting vision of Indochina. The colored palette surrounded by black transcribes marvelously the beauty and animation of the country. About Mai Trung Thu who was sensitive to the beauty of women in his country, he has devoted a large part of his work to them. From maternity scenes to sisters and young girls adorned with jewels, women are a favorite theme for the artist. In Le sommeil, Mai Trung Thu offers the vision of a more sensual figure. Asleep lasciviously on an embroidered cushion, he takes up the Asian canons. Produced in the artist's last years, this work testifies to his attachment to the female model, an infinite source of inspiration.


About Mai Trung Thu who was sensitive to the beauty of women in his country, he has devoted a large part of his work to them. From maternity scenes to sisters and young girls adorned with jewels, women are a favorite theme for the artist. In "Le sommeil", Mai Trung Thu offers the vision of a more sensual figure. Asleep lasciviously on an embroidered cushion, he takes up the Asian canons. Produced in the artist's last years, this work testifies to his attachment to the female model, an infinite source of inspiration.


Cavalière is a remarkable synthesis of Vu Cao Dam’s work from the 1960s. Created in 1963, this painting brings together the artist’s most emblematic sources of inspiration. Composed of two horsemen, Vu Cao Dam recalls the strong symbolism surrounding horses in Asia. Evoking prestige but also power, they have been represented many times by the artist. The human figure, whether female or male, is also a subject inseparable from the master’s art. Their long silhouettes wear the traditional Vietnamese dress with grace while their slightly rounded faces are full of softness. 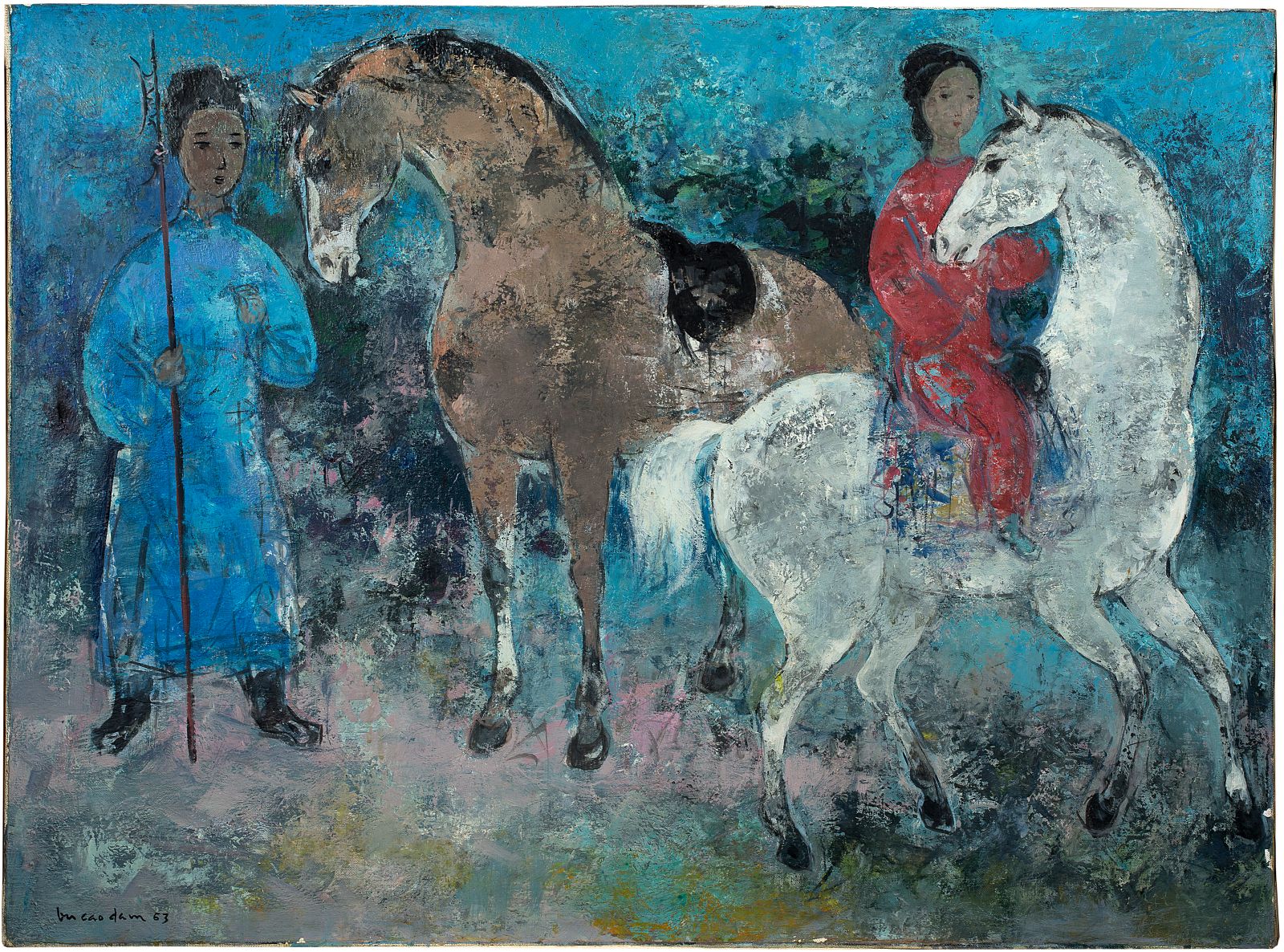 
Marked by the precepts of his Western education, Luong Xuan Nhi excels in the representation of a traditional Vietnam. The knitting scene offers a sensitive look at daily life where the woman occupies a central place. With a fine and delicate line, the artist sublimates this young woman sitting on her knees, barefoot, peacefully knitting. The elegance of her ao dai, the gold necklace and her delicate hairstyle bear witness to her social status. Her modest smile, similar to the Leonardo da Vinci Monna Lisa, and her finely made-up eyes underline the natural beauty of the model. The soft tones contribute to the delicacy of the composition. If the artist gives us a rare testimony of the daily life of Vietnam in the 1940s, it is above all an ode to the women of his country that is embodied under his talented brush. His dexterity ensured him the gold medal at the exhibition of the Annamite Society for the encouragement of art and industry in Hanoi in 1936.

Works of Art from Vietnam


The second part of the sale will be dedicated to works of art from Vietnam with nearly 170 lots to be auctioned.

The highlight of this second part, a wood screen from the 18th-19th centuries, is likely to be a big surprise, according to Johanna Blancard de Léry, head of the Asian Art department. It is indeed an unusual lot, both in terms of provenance of each plate and rarity of the subjects.

Estimated between 40,000 and 60,000 euros, this piece shows a decoration of rushes, reeds, locusts and lotus flowers in full bloom on these three carved wooden doors. Embedded in the doors are 14 blue-white porcelain plates that tell mythical legends of Vietnamese culture. Some of the plates are imperial orders and can be identified by the 4 and 6 character marks such as "Noi Phu Thi Trung" or "dai minh thành hóa niên chê". 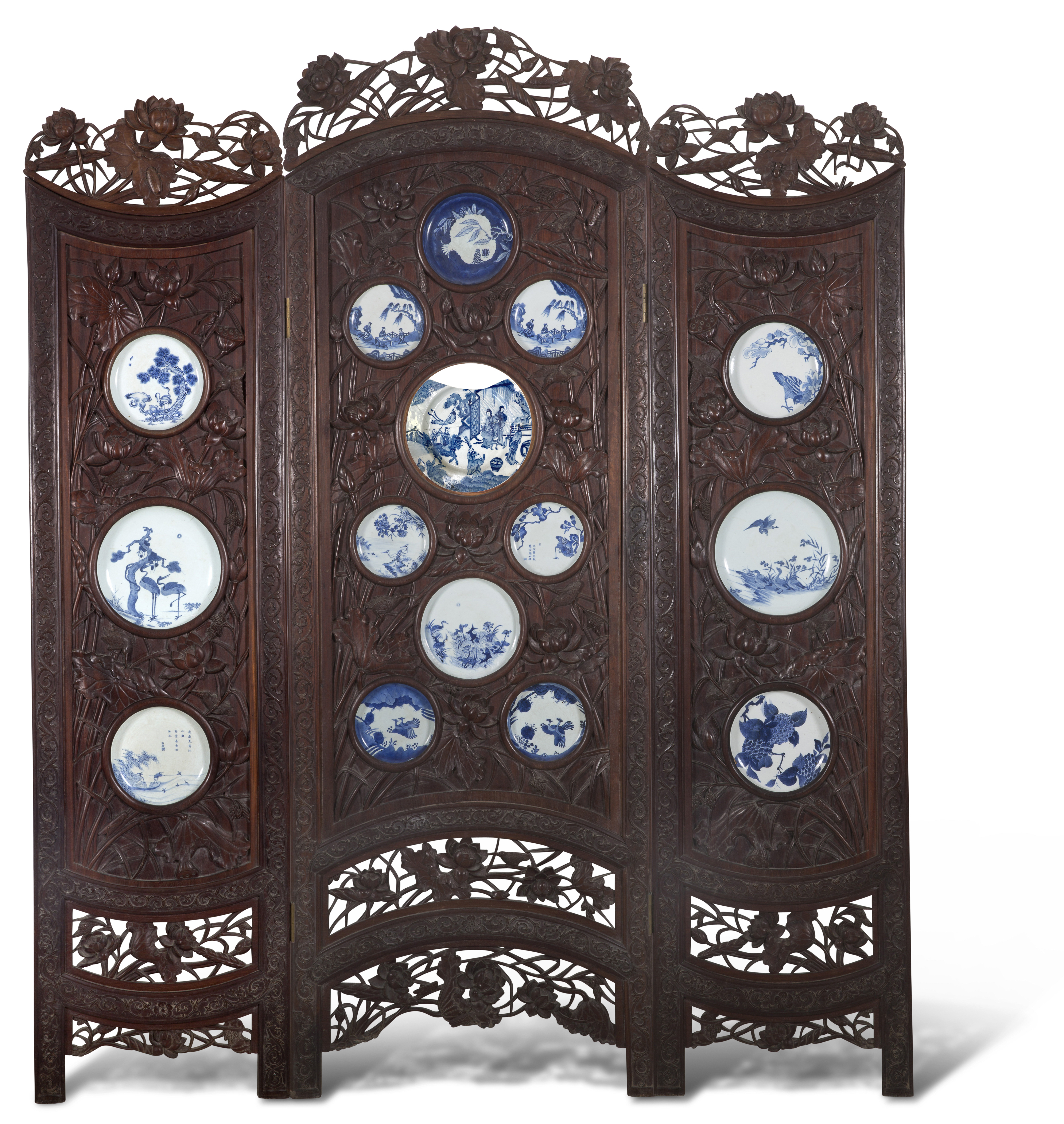 Aguttes, pioneer in the specialised field of Asian artists, and leading auction house in Europe in this market


A pioneer in the highly specialised sector of Asian artists, and in particular those who came to France at the beginning of the 20th century, expert Charlotte Aguttes-Reynier has been committed for several years to giving four annual sales in France for the major international collectors who follow her faithfully. The succession of international records clearly attests to the seriousness and quality of these sales.

Over the last few years, Claude Aguttes - auctioneer - masterful gathered high auction bids totaling nearly 18.5 million euros (including tax) for 4 paintings by the Chinese artist Sanyu, and some very fine auctions for the Hanoi School of Fine Arts. Aguttes has presented more than 90 works by Le Pho, more than 60 works by Vu Cao Dam, more than 60 Mai Trung Thu… and also obtained many world records. These results lead Aguttes to get the 1st position in Europe in this particular market.

Among the signatures which are sought after by Asian collectors, and which Aguttes defends with passion, let us quote Lé Phô, Nam Son, Alix Aymé, Le Thy, Vu Cao Dàm, Mai Trung Thu, Inguimberty, Nguyen Phan Chánh, Nguyen Tien Chung, Tran Phuc Duyen, Le Thi Luu…Raden Saleh… And Sanyu, Lin Fengmian, Pan Yuliang… but also all the artists coming from the schools of Fine Arts of these regions in Asia.

“I am very sensitive to the delicacy, talent and quality of these artists work, as well as to their history. Noting that many of them have remained unknown to the Western public, I have endeavoured from 2014 to highlight them here in Paris, the city where most of them came to perfect their artistic education. My work is therefore to pay homage to them and to promote their work in Paris.”
Charlotte Aguttes-Reynier, expert