A Tribute to the Peugeot 205 GTI

Aguttes on Wheels, which is increasingly active in the market for classic cars, has never made a secret of its liking for ‘modern classics’, those recent models now on their way up. With Peugeot having just announced the end of the GTIs from Sochaux, we felt it was imperative to pay tribute to the iconic sporting version of the 205, a car forever associated with a certain image of France in the 1980s. Follow then the legendary ‘pocket rocket’ along the streets of Montmartre, from the XT to the unforgettable ‘200-series’ Turbo 16, as well as the 1.6 and 1.9-litre GTIs. Take a look next at the catalogue for our next auction, to be held on Sunday 21 March at 2PM, with one of the four ‘200-series’ 205 Turbo 16s in its original pearlescent white, and two remarkable 205 Gentry and 1.9 GTi models, without forgetting some other remarkable cars from Sochaux: a 405 Mi16, a 309 GTI16 Dimma and a 306 Cabriolet in exceptional condition.

In 1975, Volkswagen presented a high-powered Golf and at the same time invented the GTi concept. The German company planned to produce 5000 cars, but in the end nearly 500,000 were built! That captured the attention of its competitors, who did not take long to enter the hot hatch segment.

The Lion Shows Its Claws

Peugeot, which was not at its best at the start of the 1980s, staked everything on a hot little number, the famous 205, introduced in February 1983. From the start, the little Peugeot was offered in a wide range of versions, including an 80bhp GT (which became the XT two years later). Very quickly, in February 1984, the company stepped into the space which Volkswagen had opened up ten years earlier and launched its first GTi, a 1.6 producing 105bhp. In 1986, a new mechanical specification saw its power increase to 115bhp, while the following year, the 130bhp1.9 GTi was added to the range. Peugeot’s hot hatch wasted no time in wiping out its competitors: in France, it was the leader in its segment, well ahead of the Renault 5 GT Turbo ... and the Golf GTi, while following close on Volkswagen’s heels across Europe. In 1993, new regulations required the fitment of catalytic converters, forcing the 1.6 into a well-earned retirement and reining in the 1.9, which now developed only 122bhp and was dropped from the range the following year, bringing to an end the legend of the 205 GTi after nearly 330,000 cars had been sold.

As soon as the 205 was launched in 1983, Peugeot decided to enter it in competition, with its sights set on no less than winning the World Rally Championship, which it would succeed in doing in 1985 and 1986. To achieve this, Peugeot Talbot Sport (‘PTS’ for those in the know) developed the Turbo 16, in accordance with the Group B regulations, giving birth to the most legendary rally cars of all ... and road cars too, as at least 200 roadgoing cars had to be built for it to be homologated in the category. And so the ‘200-series’ 205 Turbo 16 came to be presented at the 1983 Geneva Motor Show. It was characterized by its Winchester Grey paintwork with red coachlines and, of course, its four-wheel drive system and mid-rear mounted 1.8-litre turbocharged engine producing 200bhp. The wild ride that was Group B came to an end in 1986, after several accidents made the FISA limit the power produced by rally cars. These monsters found a new lease of life in rallycross and long-distance rallies, where the 205 Turbo 16 posted some further impressive victories, with four titles in the European Rallycross Championship and two wins on the Paris-Dakar.

Aguttes on Wheels, a leader in the market for quality modern classics, has built a reputation through its auctions as an undoubted specialist in Peugeots from the 1980s and ‘90s and, in particular, for the 205, as can be seen from these results (and records!): 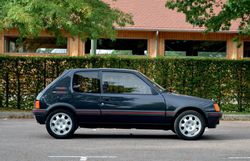 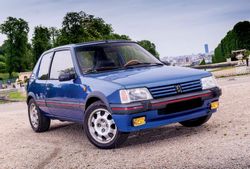 As usual, we have tracked down a range of cars representing a century of automotive history, from the 1905 Demeester, freshly unearthed from the hidden depths of the past, to a sporty Nissan GTR from 2013, and including some fine postwar and 1960s classics, as well as a good many modern classics, most of which have special features that are particularly sought after on the market ... Star billing, you will have noticed, goes to the sublime BMW 503 and the iconic Peugeot 205 Turbo 16, both of which grace the cover of our catalogue. Altogether, 60 classic cars will go under the hammer next Sunday. Please join us at 2PM on 21 March in Aguttes’ offices at Neuilly-sur-Seine or online (at droutonline.com or interencheres-live.com).

Viewing (by appointment):
Espace Charenton
327 rue de Charenton, 75012 Paris
From Monday 15 to Friday 19 March
voitures@aguttes.com
By telephone by contacting one of our staff


View the Department Page
Sign up for the Newsletter