Following the announcements of the President of the French Republic, we will be delighted to welcome you to our exhibition while respecting the sanitary rules. It is nevertheless strongly recommended to make an appointment if you wish to see one or more vehicles.

FOCUS ON THE MR. AND MRS. B COLLECTION

Since Friday, November 20th, you may have had the opportunity to browse on our website the catalog of our Autumn Sale which will be held on December 13th in Paris. Among the 88 selected cars, 3 collections as singular as remarkable will be proposed to you during this auction. This week, we have chosen to tell you more about one of them...
A passion spanning 50 years. A passion for historic cars, of course, but also that of a couple who loved getting out in the open air. The perfect combination and the starting point for this tremendous collection. We have never come across a couple who were both so enthusiastic as they recalled the countless trips and thousands of miles they covered together across Europe. Monsieur and Madame B are pioneers. They belong to that generation of collectors who restored and maintained their own cars in their private garages. Searching for documents was often a long and tedious job at a time when we only could rely on a few books and the knowledge of a handful of scholars. No matter how long it took or how much it cost, provided that the cars could once again be driven on the beautiful provincial back roads, on one of the countless rallies in which Monsieur and Madame B took part together.
At the time, Mr. B also collected motorcycles. He counted nearly 80 of them, carefully stored in the outbuildings of his property!  But it is indeed the Automobile which will remain the engine of his passion for old mechanics. Mr. B will have bought cars for a long time before starting to resell them at the end of the 80s. For example, we will find in the archives, the information relating to the sale of his Delahaye 135 M sold in 1989 in the United States. Presented at auction on December 13, the 10 vehicles from the collection of Mr. and Mrs. B will finally be sold without reserve price. The end of an era, and the opening of a new chapter for these fantastic time machines. 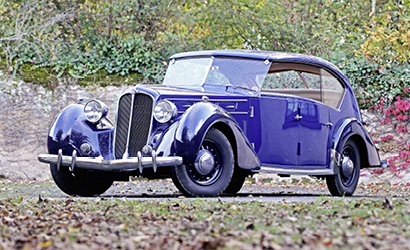 The chassis no. 47612, which was supplied to Labourdette in March 1936 and displayed at the Paris Motor Show in 1937. It is a Delahaye 148 L Aerodynamic saloon built on the basis of the “Vutotal” patent. This patent was conceived by Joseph Vigroux in 1936 and was intended to improve visibility and comfort for the driver and passengers. This was mainly achieved by dispensing with the pillars and frames normally located on each side of the windscreen and side windows. In 1942, Vigroux registered the Delahaye in his own name, before selling it to the fire brigade at Saint-Maixent in the Vienne. Monsieur B bought the Delahaye in 1968, becoming its fourth owner. The car was then in need of a complete restoration. The bodywork was entrusted to the renowned restorer Dominique Tessier at Chambray-lès-Tours, who displayed the car on his stand at 2009 Retromobile motorshow. The extensive history file makes for fascinating reading and includes numerous photographs, bills, handwritten letters and other documents. An exceptional opportunity for collectors and lovers of concours d’élégance. 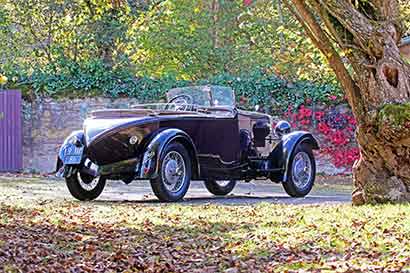 Founded in 1903 by Baron Charles Petiet, Ariès only maked 20,000 vehicles rolled off the production lines. The Ariès we are presenting here is a CB4 L-series model, an elegant four-seat ‘torpedo’. It is fitted with a 9HP four-cylinder engine with overhead inlet valves and side exhaust and a Cozette downdraught carburettor. An extremely rare, if not unique, feature of this example is that the body is styled differently at the rear, with a sharply pointed tail like an aircraft fuselage, which may be a so-called ‘Bordino tail’, designed by the Italian racing driver Pietro Bordino and originally intended to reduce aerodynamic turbulence on racing cars. The restoration was carried out thoughtfully and to a high standard, Monsieur B having taken the trouble to preserve part of the snakeskin-style upholstery on the door cards and rear seat, as well as on the dashboard. 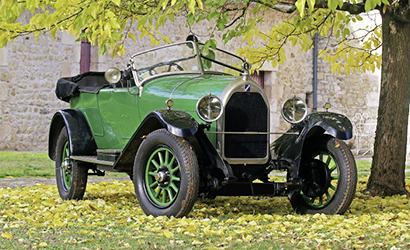 67• 1926 – Talbot DC  10cv Torpedo : the special one
According to the Talbot register and various documents we found in the car’s file, it was sold new to Monsieur Delmas and had three other owners before Monsieur B acquired it in 1979. Monsieur B then undertook a complete restoration of the car, which lasted from 1982 to 1985. He meticulously listed each stage in the restoration, taking care to note the date and the time spent on each operation. Everything is documented in the history file for the car, which makes for fascinating reading. Once it was finished and ready to take to the road once more, its owners took part in a succession of rallies with their Talbot. Just like the restoration work and service jobs they carried out, every trip was logged, along with the distance they covered! A 2400-mile tour of France in 1986, the Rallye Laurent Perrier in 1993, covering more than 3100 miles, and so they went on for 25 years. This Talbot is the car which Monsieur and Madame B drove the most.